WORKING ABROAD for the first time?

Be secure in the knowledge that you will be well looked after, have a flat arranged, get help finding a job and meet people going to the same resort as you – before you even go there…Air Promotions will help you make it happen.

We get a lot of people asking us how the company was started so we’ve tried to sum it up here:

Jobs abroad – work abroad – living abroad – bar jobs – working holidays – whatever I typed into the Google search engine nothing came up. There didn’t seem to be anything or anyone that could help me work abroad. But I was determined, England was cold and my mates were boring me to death! Their idea of fun was sitting in the same pub in the same corner moaning about the same stuff. So, I decided to get a package holiday, save up some money and see what would happen! 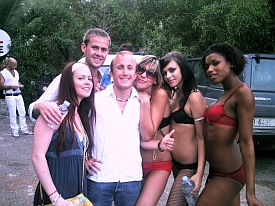 I landed in Tenerife in April 1997. Loved it straight away, the music on the strip was banging, everyone was full of energy and buzzing around – the atmosphere was electric. I knew I’d made the right decision to work in Tenerife, only problem was, I had no accommodation!

I walked around all the hotels being told the same thing, no workers accommodation – no-no-no. On the fourth day I spotted an Estate Agent by the sea, they wanted two months rent, one months deposit and a months notice before I could move out, otherwise I would lose my deposit. It was a lot of money and a big risk, but I knew that if I could get some room mates, I could get some money back, so I paid it. The rent worked out over 340 euros per week so I needed to find two other room mates, fast. I got lucky and met a nice couple, only problem was their drinking took priority over paying rent, and you guessed it, the landlord kicked me out and kept my deposit of 1360 euros plus the couple owed me 400 euros that was never to be seen again. It was my last night in Tenerife before I flew home so I decided to meet up with a few workers and get wasted. We sat down and started chatting about what had happened. They told me stories of people who’d been kicked out and had to sleep on the beach, only to have their stuff nicked or even worse, getting beaten up by the Spanish. We joked that a company should be set up helping normal people find normal room mates. But as the night went on, more alcohol was drunk and the idea was lost.

Four years later I was back in the UK on a train going to work and it suddenly dawned on me that there had to be more to life than looking at these miserable faces each and every morning. When I got to work I decided to start Air Promotions. It took over a year to build a website that had to sell something that had never been sold before. Natasha and I spent £5,000 trying to work out how to advertise our product and get the website working and that was without doubt the hardest and most mentally straining year of my life. We must have been down to our last £100 when we sent over our first three Air Pro customers to Tenerife.

For the first year we only sent groups of three people every other week. We weren’t very selective on the people we sent out that year and that caused us major problems. For transfers we used my mate’s rust bucket of a car! He used to pick people up from the airport and then his girlfriend Anna would look after them and help them find work. It wasn’t great but it just about worked. At the end of the year Anna explained to me that the people we sent out really bonded together and we should try sending bigger groups the following year which we did!

The second year we sent groups of 25 people per month which was an absolute nightmare. We thought that by sending bigger groups, you would meet more people and have a better time. But people would pair off into smaller groups and then the bitching would start. People were running around Playa de las Americas causing mayhem. All the problems we talked about all those years ago (1997) were happening again.

We decided on the third year that we would try different sized groups to see which ones worked the best. We also introduced the deposit; this helped the Rep keep control over people who were intent on causing trouble and everyone paid their rent for one month, with no exceptions! Now all we needed to do were find good Reps. After 5 different Reps we found Becky who’s now the Rep Manager and trains all Air Pro Reps. The thing we found with Reps is they needed to have worked abroad before, but not be complete lunatics who can’t be trusted. They need to hold the respect of the client but also the respect of the bar managers. They need to be able to sort the clients problems out like a mate but not be so close they can’t tell them when they’re being a problem to others. That year by far was the best year we ever had but still, things needed to be changed.

In the fourth year we only sent out groups of nine people at the start of the season and a maximum of 12 at the height of the season. It gets better…we introduced a state of the art forum, there’s no better way to meet people travelling to the same place as you on the same date, plus you can now choose your own room mates. We also expanded our working holidays to Ibiza, Magaluf and Ayia Napa and have even more destinations in the pipeline for next year.

So, if you are seriously interested in working abroad this year and don’t want to worry about anything apart from enjoying yourself, please visit our website at https://www.facebook.com/airpro.  We will help you decide which is the right destination for you but more importantly, we organise everything from flights – transfers – long term accommodation with the right room mates and a Rep that will look after you, bond your group together and advise and guide you throughout your working holiday from start to finish.

If you want to talk to people who have already used Air Promotions or people interested in going this year or next, please log on to our free community page on the website at www.air-pro.co.uk and remember, we will be there, all the way.

I don't know about you, but here on the East Coast spring is in full swing, and … END_OF_DOCUMENT_TOKEN_TO_BE_REPLACED