Thinking about travelling, but have no money? Looking for a fabulously fun way to fill in your gap year? Graduated with no real career plans just yet? Want to see the world, make new friends, party hard – and get paid for it? Sound too good to be true? It’s not!  If you’re over 21 with some retailing and/or customer sales experience then before you know it you could be swapping the High Street for the High Seas, working on a luxury cruise ship in the Mediterranean, the Caribbean, or even on a World Cruise! 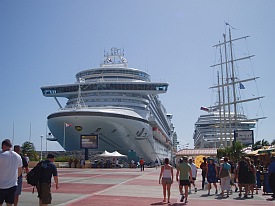 Bristol based Harding Brothers, which operates shops on the world’s most luxurious cruise ships, including the Queen Mary 2, Queen Elizabeth 2, Queen Victoria and brand new Independence of the Seas, Balmoral and Ventura, is currently on a major drive as recruitment agents for new staff and outgoing, young graduates and gap year students are top of the list!

‘We’re expanding fast and will have over 400 guys and girls of all ages working for us at sea by the end of this year,’ says Harding Brothers managing director Harold Gittelmon. ‘We’re not talking about your average cross channel ferry either; some of these ships are HUGE. Independence of the Seas, for example, accommodates approximately 3,630 guests, double occupancy and shares the title of the world’s largest cruise ship with sister ships Freedom of the Seas and Liberty of the Seas.

So what kind of people are Harding Brothers looking for? Retail experience is preferred (and if you’ve worked in watches and jewellery and/or fragrances and fashion, so much the better) and a second language would be very useful (French, German, Spanish, Portuguese and Italian speakers are all in demand). But, aside from that, enthusiasm, energy, great people skills and a desire for adventure count for a great deal. ‘We need people who love people and who can really relate to guests onboard ship and build a rapport with them,’ continues Gittelmon. ‘It’s a lot more than a sales job, guests can be onboard for anything from a few days to months, and over that time they’ll build real friendships and trust with our staff.’ So if you’ve had a part time job that’s involved you in lots of customer interfacing…then you could be just the right candidate!

There are all sorts of retail positions available right now from shoppees to managers, and if you’re good at what you do there are fantastic opportunities for rapid promotion. Contracts are usually for six months at a time, so you’re not committing yourself to a life on the ocean waves, and the company will always be flexible to take  into account any commitments such university starting dates for gap year students. Mind you, there are plenty of existing staff  who joined Harding’s for six months and are still there years later!

‘There’s a wonderful family spirit within the company,’ continues Gittelmon, ‘and as staff move from ship to ship they all keep in touch with each other.’ You can see just how much fun everyone has yourself by going to the Harding Brothers Shoppees group on Facebook.

So let’s get down to the nitty gritty. It’s not just all about seeing the world and partying (although there’s plenty of fun to be had). ‘It’s hard work and you’ve got to be prepared to take on some responsibility,’ says Giittelmon. ‘This not a 9-5 job we’re talking about. On sea days the shops can be open for 12 hours or more – and that’s a long working day. But on the plus side, when the ships are at port, the shops are closed and mostly that means employees can go exploring.

‘What’s more, while you’re onboard all your living costs are pretty much covered, so all the money you’re making is disposable income. You can save the money you earn or spend it all – it’s up to you! ‘

You’ve obviously got to be good at living in close contact with people and, in most cases, at working in a team, but the social side can is great and there are lots of interesting friends to be made. Plus you’ll get to visit places that you’ve only ever dreamed of!’

Cruise ship shops have changed enormously over the past decade and are more akin to mini department stores than corner shops. Plus the other facilities now onboard are staggering – everything from flow-riders to real lawns with croquet along with some fantastic health and spa centres.  And you can enjoy them all! Harding Brothers runs shops selling all sorts of merchandise from Kit Kats to  bars of soap, but the important part of the business is in luxury items like branded sportswear, designer & fashion watches, designer clothing,  jewellery, male grooming products etc, which demand a certain sophistication in terms of verbal etiquette and sales techniques. So guys and girls out there with fashion and jewellery retailing experience are right up Harding’s street!

Increasingly, cruise ship companies are also offering specific date gay and lesbian cruises in the Mediterranean and Caribbean. ‘We have a totally non-racist, non-ageist, non-sexist employment policy and employ staff from all four corners of the world,’ continues Gittelmon.

Seb Harding, who is now an area manager for Harding Brothers, has great memories of  his post-grad cruise ship days, which took him all around Australasia, visiting places including Sydney, Auckland, Fiji, Tonga and Samoa. With some land based retail experience under his belt, he joined ship as a shop assistant. He remembers a typical day: ‘I’d wake up around 7am and go out to the back deck to eat a full breakfast buffet – sitting by the pool in the sunshine eating and interacting with guests. I’d go to the shops at 8.30 for  the morning meeting, then have a full day of shop floor/warehouse work, again interacting with guests, ensuring they were being looked after. Then when the shops shut, I’d ensure all the shelves were fully stocked, although we tried to do this before the shop closed so we could leave on-time! After work we would usually eat first. On the ship I was on, we were allowed to eat in the passenger restaurants, so it was a 5 course meal! Then we would usually catch a show before heading up to the bar/nightclub to have a few drinks and a dance, both with other staff and guests.’

Sounds good? Seb reckons working onboard is an amazing way to see the world. ‘I had my doubts when I first stepped onboard, but within 24 hours I don’t think I ever wanted to leave. I made a lot of money and saw things the other people I went traveling with (and left in Australia) didn’t see and will never get the chance to. I still talk to many of the people that I met and love the fact I can still go to many places on the other side of the world and have a place to stay!’

So…better than working in the high street then?

‘Cruising is like no other job in the world,’ Seb continues. ‘Sometimes the hours can be long and morale can  get a bit low. But all you have to do is step outside and see the sun set over the sea, or wake up in another country and you’ll be full of life again. Now I work in an office, I know I will never have a job like that again! So many friends living in close quarters, and waking up to another country every day. If I had the chance, I’d do it all again!’

If you feel you have what it takes to work for Harding Brothers, or want to find out more, email Harold Gittelmon, harold.gittelmon@hardingbros.co.uk, Telephone: 0117 982 5961. For an application pack or visit their website at https://www.hardingbros.co.uk/join-us/working-for-us/.

I don't know about you, but here on the East Coast spring is in full swing, and … END_OF_DOCUMENT_TOKEN_TO_BE_REPLACED