Spending an extended time volunteering abroad can be the most intimate way to discover a new country. Paid work is exciting, but ultimately the beneficiaries are businesses and you may find yourself spending more time working for the system than experiencing another culture.

Working abroad for free, i.e., volunteering overseas, may not bring financial gains, but can broaden your mind and provide experience for a new or different career. That was Alex Quinn’s motivation when he left his home in Stretford and took six months out to volunteer in Uganda.

The Manchester University economics graduate worked for a community based organisation called the Women’s Initiative for Prosperity, spending half a year in Kamuli, a small town in Busoga, eastern Uganda, and travelled a couple of miles to the ‘subcounty’ of Buwanume for his placement as an Economic Empowerment Intern.

But what did such a grand job title entail? Quite a lot, as it turned out. Alex, who completed an MA in development economics, said: “My main focus was setting up a programme to provide the local widows and mothers with the capacity to generate incomes at some point in the future.

“This involved researching their needs and capabilities, fundraising to fund the project, then providing the women with loans in the form of livestock that they could use to breed and repay the loans hopefully within a year, which could then be recycled to other members of the community.”

Did it work? “The organisation is small, with only a couple of people directing it, and the local community which it serves is involved too.  As such I was in control of my own programme, and had a lot of influence on the whole organisation, virtually running it while I was out there, in partnership with a local volunteer called Joseph.

“We managed to get enough funding and interest to make loans to 23 women, consisting of chickens, pigs, and goats.”

Alex’s economics background was invaluable for making the project a success, as he was in charge of working out the programme’s financial details.

“I also had to design the loan repayment structures, the contracts, co-ordinate the finances of the programme, direct the purchase of the livestock – I couldn’t purchase it myself because I didn’t know the language, and my presence would’ve pushed the prices up, so I had to rely on Joseph doing what I told him here,” he said.

“Then we had to run training sessions for the women to ensure that they could take care of the animals and understood what was expected of them, helping them design business plans, budgets and repayment schedules.”

Alex came across the placement through an advert on idealist.org, and unlike some projects, he did not have to pay the organisation to join them – however he had to fund his own flights and living costs. Instead, he raised money while in Uganda to fund the loans programme.

He said: “I was the first intern and they were such a small and relatively disorganised organisation there wasn’t much to the application process, I e-mailed them asking for more details and without telling them anything about me they said they’ve love to have me, which was rather unexpected and a bit worrying!”

It was not a cheap six months – his initial three-month visa cost US$50 and needed renewing halfway through, while flights from the UK totalled more than £500 and vaccinations and malaria tablets cost about £250.

“I had to pay the ‘charity’ to pick me up from the airport, a couple of nights in a hotel, and for sorting some other things out for me, then I had to pay for my accommodation which included meals, about £60 a month, and maybe £200 for everything else. The total cost of the whole thing including spending money was probably £2, 000 to £2,500 or so and I was living on quite a tight budget.”

Spending so long in another country brings a wealth of experiences, but Alex said the best thing about his time volunteering was a bit cliché.

“The old adage that travels broadens the mind is pretty true – I find the more you see and the more you learn, the more you understand not just other people and places better, but your own environment, history, yourself and how it all interacts and influences each other. At least, for me being a ‘new institutional economist’ it does.

“There were times out there when I felt I could’ve moved there, I didn’t really miss much from home, apart from the food, but then you appreciate decent food more out there when you do get it!”

Of course, everything has a dark side – and Africa presents a challenge to anyone used to Western comforts. Yet when naming the worst thing about his trip, Alex said the obvious problems were less of an issue than he expected.

“All the usual things – mosquitoes, power cuts, the toilet or lack thereof – were awful at first but second nature by the end. 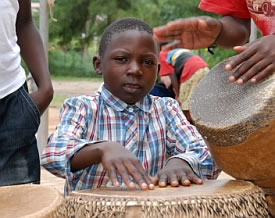 Volunteer to Work in Uganda

“I would have expected to say the worst thing was the poverty I saw, the kids without clothes, houses without contents etc but that didn’t really bother me much, if at all. Everyone generally had enough to eat, as the land is good for growing crops, they just have no real way of making money from it.

“The thing that was worst was the attitudes, the lack of ability to question and lack of desire to think for themselves. The tendency to believe what you are told from those above you without questioning them leads to a population where the majority believe in witchcraft, where everyone I met was homophobic yet had no understanding of why, where they believe “sometimes the laws of physics work” or you can pick up sexually transmitted diseases from using a urinal.

“The same is true of the technologies they import, any shopkeeper or bar tender will add up your bill with a calculator, even for the simplest of calculations, because while they understand how to use a calculator they don’t really analyse what it actually does and then do that process for themselves.”

“Having said that nearly everyone I met was happy, far happier than people in the UK. Sure, they all wanted to be rich, but due to having no expectations they were quite content with their lives.”

I don't know about you, but here on the East Coast spring is in full swing, and … END_OF_DOCUMENT_TOKEN_TO_BE_REPLACED