You are here: Home / Jobs Abroad / A Working Holiday in San Antonio, Ibiza

If you’re looking for fun-in-the-sun then consider following the lead of Hayley Hurst, a 25-year old from London. Hurst has been on a long-term holiday working at Café Mambo on the Sunset strip in San Antonio, Ibiza.

Why did you choose to work in Ibiza?

I’ve been on holiday here with my best friend for the last 5 years. Before this I’d holidayed in Ayia Napa and various places with friends but nowhere compares to the White Isle. After my first holiday I was hooked. I have never wanted to spend my holiday’s anywhere else. Every year I left this place I found myself so depressed at the thought of leaving the island for another year. After the fifth year on holiday, I decided that 2 week’s just wasn’t enough for me. I wanted to be part of the lifestyle, not just a tourist. That’s when I decided I was to go back the following year as a worker. 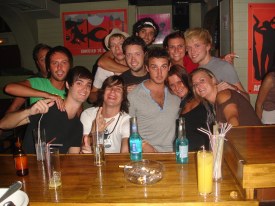 Had you worked abroad before?

I’ve never worked abroad before this was my first year. It will now be the first of many.

What job were you doing in Ibiza?

I was working as a Ticket seller. I sold Tickets for every club night/Promotion that was happening across the Island.

How did you find the job?

I actually didn’t have a job planned for me for when I arrived in Ibiza. I arrived on the Island at the beginning of May so I had a good couple of weeks before the season started to find something. I had my sights set on Café Mambo though I knew I wanted to work there. I saw a job advertised for a Female Ticket seller and after a week of persistent nagging I got offered a free trial.

I really loved my Job, my hours were perfect for me I started at 7pm and finished at 2am. That meant I could sunbathe all day (or sleep…ha, ha) and by 2am I’d finish work ready to party. Ibiza is famous for its Sunsets; it was great being paid to work and get to watch the sun go down every evening from the best view on the island. It just never felt like work. Working here I gained good contacts and I could often get free entry to most club nights including Pacha, my favourite club. I got to meet so many people including world famous DJ’s who used to play here every night.

What was your day to day routine?

I was going to say wake up but there was a lot of morning’s id just be getting in after clubbing all night and hitting after parties all day. In a nutshell very little sleep, sunbathe, work, party, party and more partying.

Unlike most jobs in Ibiza which are commission based. I was lucky to be on a set wage of 50 Euros a day which was good as I knew I would be able to cover my rent each week.

Accommodation was not included I had to find my own when I arrived on the island. Expect to pay on average 300 Euros a month rent each person, you will also be expected to pay a deposit each at the beginning of the season too, normally amount of 1 months rent. You will get this back at the end of the season from your landlord on inspection of your apartment.

My best advice on arrival to the Island is to head for the Ship inn in San Antonio’s west end. It’s a workers bar and has a pin board which landlords use to advertise accommodation.

Would you recommend this type of job?

Yes I would definitely recommend European resort jobs to anyone really. Be prepared to work hard though, you don’t get paid for being Lazy. Sick days are almost a no no, if you want to party all night and have no sleep you’ve still got to make it to work.

Do you need to be qualified?

No, I’d never done this type of Job before, you just need to be good at talking to people and not afraid to approach people. It will help you a lot to have a good knowledge of what nights are on and who’s DJ’ing where. There is so much happening across the island every night that you’re almost guaranteed to be able to recommend a night to most people. Most of these jobs are given to females though as females can easily approach both groups of male and female.

Guys tend to pay more attention to a girl trying to sell them tickets than if a guy was. For obvious reasons that’s just the way it is ha, ha.

Can you give other people advice if they want to work in Ibiza?

If you plan to work in Ibiza for a season but you don’t know any friends who want to do it with you, don’t fret. I did it on my own and id advise it more than taking a friend. I went on my own which meant i had to pluck up the courage to go and talk to other workers. If id have had friends there I’d have leant on them. By the end of the season I was so much more confident. You’ll make friends in no time. Everyone is in the same boat and everyone is so friendly. Don’t forget you’re all there for the same reason…to work hard and party harder!

Also save as much money as you can before you go, the more money you have the more freedom you’ve got out there. You want to be able to enjoy the experience as much as possible.

Are there other things to do like sports/beach/tourist attractions?

Yes Ibiza is a very Beautiful Island as a worker you tend to forget sometimes that there are other things to do apart from work and party. It’s good to take some time out, travel around the island and take in the culture. After all it’s your home too for 6 months of the year. There are some beautiful beaches to be seen and some very nice restaurants to be visited. I’d recommend Benirras beach on a Sunday where the hippies play on the bongos and at night there is a fire show. It’s a very chilled vibe.

Formentera is a great island to visit too. You can pick up a ferry from Ibiza town.

What’s so good about working out there?

I got to party every night and listen to my favourite DJs, sunbathe all day on stunning beaches. In Ibiza you have the best of the both you can party for days on end, but you can also get away from it all and totally chill out. There’s a nice balance.

Tell us about the best and worst bits!

Hmmm worst bits…I think the worst bit of the whole summer is having to leave the island once the season is finished. Having to leave all the friends you’ve spent every day with for the last 6 months.

The best bits for me was just having freedom to do what I want when I want.

Spending my days and nights with like minded people. Highlights of my summer were random villa parties, sunsets, sunrises, dancing on tables at Bora,Bora. Doing marathon sessions in space on a Sunday. Dressing up for DC10 on a Monday. Going out with the girlies to Pacha once a week and swapping the usual flip flops for some heels.

Did you make some new Friends?

I made lots of new friends out there most of whom I’m still in contact with. We meet up back at home now and party together most weekends. It definitely gives you a bigger social circle.

Did you plan to work abroad again (or have you since you worked there?)

Do you feel this experience will help you with your career?

It’s definitely helped me as a person with my confidence. It’s good to have time out of your career to travel and work abroad. It opens your mind to different avenues you may never have considered before. The whole experience is a learning curve.

Out of interest did you go to College or Uni in the UK?

No I never went to college or Uni. I’ve always worked since I’ve left school

I don't know about you, but here on the East Coast spring is in full swing, and … END_OF_DOCUMENT_TOKEN_TO_BE_REPLACED