Meet our man Danny O’Reilly, who has been an Overseas Resort Manager with Club 18-30 for the last 6 years. In total he has spent almost 10 years working overseas for Club 18-30, Sunset Holidays and Thomas Cook.

How did you get your job?

I went along to a walk-in interview that was being held at the Big Reunion in Butlins. Following this I was invited to a group interview in London and was then offered a place on the Club 18-30 Induction Course which is the final stage of the recruitment procedure. Unfortunately though, my University Finals were at exactly the same time so I was unable to attend the induction. Luckily the Club 18-30 Overseas Department suggested that as I had performed quite well in the two interviews if I call back following my exams in June their was the possibility of a high season repping position being available. As soon as my exams ended I pestered them for about a fortnight calling almost every day and eventually I was sent out to Zante with just 3 days notice where I was to work for Club 18-30’s sister company Sunset Holidays.

What happened when you arrived at the resort?

I flew out to Zante right at the end of June when the resort was in full flow and was based in Laganas with 3 other reps. I was very much thrown in at the deep end as the resort was in full flow and undermanned, subsequently training was extremely basic and very brief. I shadowed the senior rep Steve for a couple of days watching what he did and making notes. I also had to learn about the excursions, teach myself the paperwork and find all of the hotels which were spread across the whole of Laganas. On my second day the resort manager took me into the office to explain the company hierarchy and strict code of conduct, the next thing I knew I was attempting to look after 6 hotels and a few hundred guests. 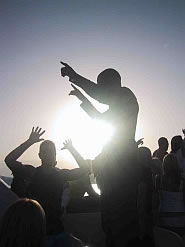 I am sure that to begin with I was out of my depth but I gave it a go and seemed to pick up the main aspects of the job to a reasonable standard. As with most reps in their early days I was really nervous about delivering the welcome meeting speech. I can recall my first quite vividly. There were about 80 guests all packed into a small bar called Piggies. To be candid I was kicking myself. However, as I became more experienced and confident at public speaking welcome meetings became one of the highlights of the week and there was always a lot of competition between the four of us to see who could get the biggest laugh or slip in the best gag.

What about the training?

The meager amount of training I received is not the norm. At Club 18-30 all 1st year reps will have covered the basics at the induction course. Full season reps will then undertake an intensive 10 days-2 weeks of pre-season training out in the resort. Even the high season reps will partake in a structured training programme which is a slimmed down version of the pre-season training programme. In this job reps need to find their feet quickly. As a Resort Managers I need high season staff to hit the ground running. Any preparation that you can do in the UK is time well spent.

What chances are there to progress your career?

I progressed through the ranks quite quickly, too quickly to be honest. My fist season lasted just 12 weeks and I was promoted to senior rep mid way through my second season. I was again promoted at the end of the second season to Area Controller which is the equivalent of a resort supervisor. I soon realised after flying out to Crete in mid-march that a) I did not see eye to eye with the Resort Manager and b) that I really missed the hands on repping side of the Senior Rep role. Subsequently, this came to a head and I asked to be demoted back down to Senior Rep. The next morning I was summed into the resort office at 8:00am and told that I could resume a Senior Rep role but I was being transferred over to the Island of Corfu. On arrival in Corfu the Resort Manager met me and explained that he didn’t really need another Senior Rep and wanted me to resume the role of Area Controller within a month. Luckily Tenerife were short of a Senior Rep and 3 weeks later I landed in the Canary Islands. It was from this point that my Career really took off. I spent a further 1 1/2 seasons as a Senior Rep before being given my own resort to run, Gran Canaria with a team of 9 staff. Since then I have gone on to manage the resorts of Cyprus, Kos, Rhodes, and Crete.

Where have you worked?

Are there any downsides?

The down sides really depend on the individual. If you need a lot of sleep then the late nights and airport transfers at 4:00am are probably going to take their toll. If you are quite sensitive then abusive discontent guests shouting at you might be a problem. For me though it was returning back home in November after being away for 7 or 8 months and trying to play rugby 1/2 stone heavier and totally out of breath after 5 minutes. Working for Club 18-30 the good times will always outweigh the bad ones and if they don’t then you are in the wrong job.

What’s the score with food and accommodation?

Accommodation comes with the job. The quality and location of rooms that I have stayed in has varied considerably. It could be a modern two bedroom apartment which is shared with another rep or a dark and dinghy room in the basement of Hotel complex that floods on a regular basis and is a mecca for cockroaches. I have lived in both, for me though the only really important issue as a rep was being close to the hotels in which I was repping, you really don’t spend a considerable amount of time in your room anyway. I have learnt though that female reps tend to get the pick of the rooms and they normally avoid the ones with cockroaches. understandably.

Certain accommodations are happy to feed and water their rep especially very large complexes. In smaller family run units as are common in the Greek Islands, if the rep builds a strong rapport with the hotelier then they have a good chance of being very well looked after. There may also be certain bars and restaurants around resort where reps receive discounts and freebies. In my opinion though, Holiday Reps should never expect anything for free and always be prepared to pay the full price for food and drink no matter how many discounts they have had in the past.

What are you doing now?

I now work for company called readytoREP. We have recently put together a full days practical training course designed specifically for people interested in working as Overseas Holiday Reps. From my experience of recruiting overseas staff, which I have been carrying out since 1999, far too many people are turning up at interviews with little understanding of what the job is about and the skills required. Many are also totally under prepared for the vigorous interview procedure. The readytoREP course will give potential reps a solid foundation from which they can go on and perform confidently at any Holiday Rep Interview. It will also give them a great insight into the reality of overseas life as a Holiday Rep.

I am also writing a new Foundation Degree in Travel Operations Management for Wolverhampton University.

Would you recommend working for Club 18-30?

For me working for Club 18-30 has been an unsurpassed experience. It has been my life for almost 10 years and there is absolutely nothing I wish I had done instead. Many of my work colleagues have become great friends. Numerous skills and experiences that I have gained whist working for a tour operator are transferable into copious other roles. I am now very confident in my ability to deal with almost any situation and have dealt with guests dieing whilst on holiday, serious moped crashes, 18 hours flight delays, major staff shortages, hotel over bookings, coach strikes, guests being arrested for drug smuggling, hotel rooms being smashed up, rapes, muggings and over zealous media attention. All of this happens and as a Club 18-30 rep or Resort Manager it all needs addressing and resolving in a professional and often empathetic manner. To succeed you must be 100% committed this is not a 9-5 job nor is it for the faint of heart. Would I recommend it? Definitely.

Club 18-30 reps are generally the highest paid in the industry due to the very long hours they work and limited time off. It is not unusual for a High season rep to return back to University with £3000 or £4000 saved up over the summer. Another potential perk working for Club 18-30 is that all of the guests you are looking after and spending time with will be a similar age to yourself, no families no children and no elderly guests.

What’s your most memorable experience?

There are so many that I could fill this whole blog. One of the most recent was a birthday party we organised for a rep during the very last week of the season in Crete. All of our hotels except 3 had closed down for the winter so we only had 40 guests in resort and a hand full of reps. The party kicked off in the hotel pool bar at midday and was still going strong at 7pm. The hotelier had made Ryan a beautiful birthday cake which ended up being the main weapon in a huge food fight that broke out. There were guests their in impromptu fancy dress, the hotel staff were dancing in the pool fully clothed, the reps were taking turns DJing and serving drinks. Someone else had built a ramp and was doing jumps into the pool on their mountain bike and of course the sun was shining. It had been a long hard season and everyone was letting their hair down it was a brilliant ending to a fantastic summer and most importantly guests absolutely loved it. A day never to be forgotten by anyone who was there.

What’s your most bizarre experience?

This occurred in my second season. I was summoned to one of our apartment blocks by an irate hotelier. On arrival I was instructed to “stop the naughties” as the elderly Greek hotelier described it, that were occurring around the back of the pool. On inspection I was greeted by an Animal Farm-esqe scene involving a stray mongrel dog, an Albanian bodybuilder, lashings of tatziki and an exceptionally drunk and deranged guest. Unsurprisingly the guests who wasn’t even with Club 18-30 was crippled with embarrassment and flew home a week early, I m not sure what happened to the dog or the bodybuilder.

I don't know about you, but here on the East Coast spring is in full swing, and … END_OF_DOCUMENT_TOKEN_TO_BE_REPLACED