At WORKING ABROAD MAGAZINE we like to bring you the facts from the people who have done the job, so we spoke to Matthew and Isabel to find out about their experiences working on cruise ships through Harding Brothers…

“I had been backpacking for a year and was back at home and bored,” says Matthew Everson. “I still had the travel bug, though, and thought working on a cruise ship would be the best way of seeing the world and getting paid for it!” 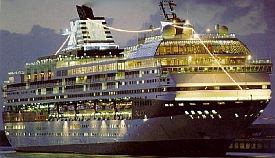 That was two years ago and Matthew is now on his fifth ship, including spells on the Queen Mary  2 (transatlantic) and QE2 (world cruise)’ I went to P&O’s Arcadia as emergency cover for someone who had to transfer to another ship. I was only supposed to be there for three months but I was promoted to Assistant manager and ended up staying for a full six months!’

Matthew had worked part time at Tesco while he was at university and also had experience as a restaurant assistant manager and selling nuts, bolts and power tools at an engineering firm. Now he’s a shop manager responsible for selling fashion on one of the world’s most luxurious cruise ships, the Silver Shadow, and has had experience with most areas that Harding Brothers covers, including Casual and Formal Clothing, Fine jewelery and Costume Jewelery, Perfume and Cosmetics.

He describes a typical day: “On the Silver Shadow our opening times are a little different to the larger ships; we open at 9am until 12 noon then close until 2.30pm. This give’s us an opportunity to have a break, re-stock the shop or have a sleep. We reopen at 2.30pm until 8pm, and then again from 9.30pm until midnight. I typically will leave the office at about 1am after all the paperwork has been sent to the office. On a port day we open about 1/2 an hour after we sail, because we are not allowed to open in port. This typically means we are off duty and go ashore, unless you have other duties to do or are IPM (you take it in turns to stay onboard for safety reasons).”

Since working for the company Matthew has been to over 65 countries including Australia, China, Columbia, Japan, Papua New Guinea, Tonga, India, Vietnam, Singapore, New Zealand, plus most of the Caribbean, Russia and Mediterranean. (WOW!)

“Harding Brothers are very flexible and let you decide where you would like to go after you have completed your first contract with them,” he says. “There is a fantastic variety in cruise ships and itinerary. Shore side management is always very supportive if you have problems on board a ship and even when you are on leave.”

WAM: So what would he say to other graduates considering applying for a position with the company?

“If you enjoy travel, hard work, adapt very quickly and you can get along with people for long periods of time, then working on cruise ships is a great way to see the world, meet new people and experience things you would never normally get the opportunity to do, from helicopter flying to  husky racing, from sky diving to Great White shark diving!”

We also talked to Matthews colleague Isabel who always wanted to see the world. When she discovered the world of onboard retailing she contacted Harding Brothers – and so started her new career in 2005. She is currently Boutique Manager onboard the Silver Whisper now in the Mediterranean after wintering in Asia, Australia and New Zealand.

WAM: What do you like about your new life?

“Everyday is different, nothing is ever boring,” she says. “Everyday is a new adventure, someone new to meet, a new city to discover, so many exotic ports to explore. The view from our window changes every single day, there is no time to be bored onboard!”

Having visited every single Continent, Isabel just can’t wait for the next port of call.

“I usually go on a tour in the morning, which always takes us somewhere interesting; then I come back to the ship, collect some friends and go out for lunch. I love to try the local food, then maybe have a coffee or a drink somewhere in the port. After that it’s time to go back to the ship and get ready for work!”

Her shops open before dinner and then again afterwards until midnight. “The shop is always busy, busy, so the time flies by. After that a drink or two in the crew bar is always a must, and then tomorrow we’ll start all over again.”

For any graduate considering their career options, Isabel highly recommends working for Harding Brothers. “It’s a great experience on every level, professional and personal,” she says. “It’s a chance to grow, make many friends all over the world and learn a lot! The experience that you will have onboard – no other place can give to you.”

I don't know about you, but here on the East Coast spring is in full swing, and … END_OF_DOCUMENT_TOKEN_TO_BE_REPLACED